Our New Novel "A SEASON IN QUEENS" IS OUT NOW...

Great Read! This is a wonderful coming of age story set during and in the aftermath of WWII. The writing is terrific and the voice of the young protagonist as she struggles to find her way is pitch perfect. Kudos to the authors.

––John L. among fans on the Net 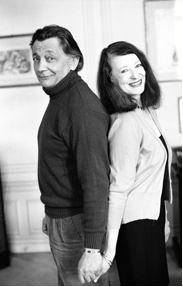 We make up stories...

We are writers. We make up stories. Some people say writers write because they’re inept at living otherwise. Time will tell how apt we are at what we do. You can read what a lot of people have been thinking about our beloved  Fatima by clicking on “from our readers”. Fatima’s Good Fortune is one of our co-written novels. It was published in the United States, France, and around the world. We also write screenplays, a habit you could associate with masochism.

We write every day in a café near the Eiffel Tower, where we’re alone every morning with Siamese computers over a cup of coffee, until the street sweepers come in to hang out for their deserved break. Can two people write fiction together? We started out doing screenplays together, and nobody questions the collaboration that goes on for scripts. Our computers are joined by software called Timbuktu, but we’ve been together so long—since we were teenagers—that you could say that our heads are in the same computer.

We tweak realism to try to create a sharper image of reality. Our hero is Charles Dickens.

We’re New Yorkers who live in Paris, who love America from afar. Joanne studied at Queens College, and Gerry has degrees from Princeton and Harvard. We go back home as often as we can while we abide, luckily, in a place that is privileged in many ways. Gertrude Stein wrote that it isn’t what Paris gives you but what it doesn’t take away. We are, all the same, far from divorced from our attachment to the U.S.A., with its triumphs and its traumas, nor out of touch, we hope, in general.

Gerry, for longtime Senior European Correspondent for Condé Nast Traveler, has also written innumerable articles for American magazines about the arts and life in Europe.